A new African Plant Breeding Academy, designed to train a generation of plant breeders who will help improve the nutritional value of indigenous African crops, has been launched by the University of California, Davis, in collaboration with the African Union’s New Partnership for Africa’s Development and the African Orphan Crops Consortium.

“We are honored to be part of this new venture,” said UC Davis plant scientist Allen Van Deynze, co-founder of the UC Davis Plant Breeding Academy, which has trained 114 crop breeders from 26 countries since 2006.

“We believe that the new plant breeding academy will produce important benefits for the daily lives of many Africans,” said Van Deynze, who is also the research director for the University of California Seed Biotechnology Center.

The new academy is part of the African Orphan Crops Consortium, which aims to sequence the genomes of 96 indigenous orphan crops that are important for African diets. The term “orphan crops” refers to African food crops and tree species that have been neglected by researchers because they are not economically important on the global market. The 96 crops being sequenced by the consortium include African eggplant and potato, cocoyam and Ethiopian mustard, as well as more commonly known crops such as cassava, cacao, millet, sorghum and legumes.

The African Plant Breeding Academy will enable plant breeders to enhance the nutritional value of these key crops through breeding and application of genomic tools.

"Getting opportunities to grow nutritious food and put it into the hands of those who need it most has been the ambition of the African Orphan Crops Consortium since its inception,” said Howard Yana-Shapiro, chief agricultural officer for Mars Inc. and a senior fellow in the UC Davis Department of Plant Sciences.

"It is hugely exciting to realize that, through the pursuit of fundamental science, the consortium is playing its role in fighting chronic hunger and malnutrition, and Mars is proud to be a part of this effort,” he said.

The new academy, a six-week program, will be delivered in three two-week classes, beginning Dec. 2 at the World Agroforestry Center in Nairobi. Closing date for applications is July 15.

Participating African plant breeders will be trained in the most advanced theory and technologies for plant breeding, in support of critical decisions for crop improvement. The curriculum will cover the latest concepts in plant breeding, quantitative genetics, statistics and experimental design.

The program also covers accurate and precise trait evaluations, strategies to integrate genomics into breeding programs, and identification and use of genomic data and DNA-based markers in breeding programs.

The instructors are internationally recognized experts in plant breeding and seed technology.

With significant contributions from Life Technologies and the World Agroforestry Center in Nairobi, the African Orphan Crop Consortium is developing state-of-the art laboratories to apply the technologies being developed for Africa.

About the New Partnership for Africa’s Development

The partnership is a program of the African Union, with the mandate to eradicate poverty through sustainable growth and development. The key priority areas of the agency include, among others: facilitating implementation of the food security and agricultural development program in all sub-regions; and monitoring and intervening as appropriate to ensure that the Millennium Development Goals in the areas of agriculture/food nutrition, health and education are met.

In May, UC Davis was ranked No. 1 in the world for teaching and research in agriculture and forestry by QS World University Rankings. For more than 100 years, UC Davis has engaged in teaching, research and public service that matter to California and transform the world. Located close to the state capital, UC Davis has more than 33,000 students, more than 2,500 faculty and more than 21,000 staff, an annual research budget of nearly $750 million, a comprehensive health system and 13 specialized research centers. The university offers interdisciplinary graduate study and more than 100 undergraduate majors in four colleges — Agricultural and Environmental Sciences, Biological Sciences, Engineering, and Letters and Science. It also houses six professional schools — Education, Law, Management, Medicine, Veterinary Medicine and the Betty Irene Moore School of Nursing. Your grocery store without bees. Now factor in citrus greening disease, and then what?

PROVIDENCE, R.I., June 12, 2013 /PRNewswire/ -- One of every three bites of food comes from plants pollinated by honeybees and other pollinators. Yet, major declines in bee populations threaten the availability of many fresh ingredients consumers rely on for their dinner tables.

To raise awareness of just how crucial pollinators are to our food system, the University Heights Whole Foods Market store temporarily removed all produce that comes from plants dependent on pollinators. They pulled from shelves 237 of 453 products – 52 percent of the department's normal product mix.

To help support honeybee populations, for every pound of organic summer squash sold at Whole Foods Market stores from June 12-25 the company will donate 10 cents to The Xerces Society for pollinator preservation.

"Pollinators are a critical link in our food system. More than 85% of earth's plant species – many of which compose some of the most nutritional parts of our diet – require pollinators to exist. Yet we continue to see alarming declines in bee numbers," said Eric Mader, assistant pollinator conservation director at The Xerces Society. "Our organization works with farmers nationwide to help them create wildflower habitat and adopt less pesticide-intensive practices. These simple strategies can tip the balance back in favor of bees."

Will DuPont and Monsanto play a role in enhancing African crops? Shapiro has made it his mission to improve nutrition in Africa. "We need nutrition security, not food security," he says. "A lot of the calories out there right now simply aren't that useful."

Along with Mars Inc., he has launched the African Orphan Crop Consortium to improve the nutrition, productivity and climate adaptability of popular African food crops. He's appealed to the world's largest biotech companies to share what they know about these crops, and to collaborate in finding more nutritious and protected varieties of these crops.

For the full story, read the NPR article online.

Coming Soon to Your Next Memorial Day Picnic -- Insects as Food and not Pests? Insects form part of the traditional diets of at least 2 billion people according to a recent report by the UN Food and Agriculture Organization: Edible Insects, Future prospects for food and feed security. http://www.fao.org/docrep/018/i3253e/i3253e.pdf

Over 1,900 species have reportedly been used as food. The most commonly consumed insects are beetles (Coleoptera) (31 percent), caterpillars (Lepidoptera) (18 percent) and bees, wasps and ants (Hymenoptera) (14 percent).

Highlights from the report:

"Insect rearing for food and feed remains a sector in its infancy, and key future challenges will likely emerge as the field evolves. As such, readers are encouraged to contact the authors with feedback on this book. Such contributions will undoubtedly assist the future development of the sector."

While it's unlikely many of us in the US will be dining on insects during this year's Memorial Day picnics, maybe someday soon those pesky ants will be forming the basis of grandma's famous potato salad.

“Our Nation’s agricultural research enterprise is not prepared to meet the challenges that U.S. agriculture faces in the 21st century.” Report to the President on Agricultural Preparedness and the Agriculture Research Enterprise, Dec. 2012

The need to produce and deliver safe and nutritious food is a fundamental human concern. With world population expected to increase to 9 billion by 2050, experts say that we will have to produce more food in the next 40 years than we have in the last 10,000. Unfortunately, funding for vital agricultural research lags far behind other entities and is threatening the future health of our society.

In December, the President’s Council of Advisors on Science and Technology recommended that the United States increase its investment in agricultural research by $700 million per year. Instead, the Sequester resulted in cuts of approximately 7.6%. This is simply not sustainable.

For more than 140 years, the University of California has conducted critical food, agricultural and natural resources research and public outreach that serve Californians, the nation, and the world. Farmers, ranchers, and consumers — including low-income and underserved communities — benefit from UC’s agricultural research that helps to ensure a safe, secure and plentiful supply of food and energy as well as clean and sustainable air, water and other natural resources.

Agricultural research and extension have helped make U.S. farmers among the most efficient in the world. Over the past thirty years, California has increased the production of milk by 44%, processing tomatoes by 69% and almonds by 122%. At the same time, new production methods have helped growers save 100,000 acre-feet of water a year. But our status as the world leader in agricultural production is threatened by the waning public investment in agricultural research and is crippling our ability to tackle the global food and water challenges of the 21st century.

Due to state and federal budget cuts over the past decade, the number of Cooperative Extension Specialists and Advisors has decreased by 38%. This has caused reductions in our Integrated Pest Management Program, Sustainable Agricultural Research and Education Program, Nutrition Education programs, Water Resources Center and the elimination of regional offices. While new partnerships and support from industry have helped, many of the developments necessary to meet these challenges are public goods not easily monetized, but long-term investments benefit us all. If the country continues to disinvest in basic agricultural research, the results will be devastating for the health and safety of our country and the world.

We must all look to the future and see the opportunities generated by restoring and — whenever possible — growing funding for the core capacity programs which help underpin the infrastructure of land-grant colleges of food, agriculture, and natural resources and Cooperative Extension units across America. Working together, we can ensure a safe, healthy food supply for the planet. 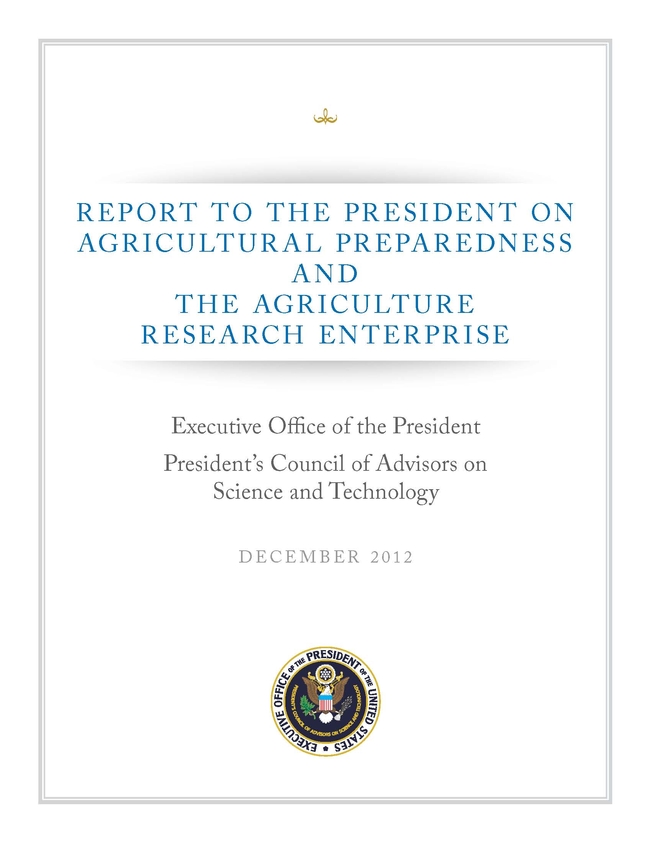